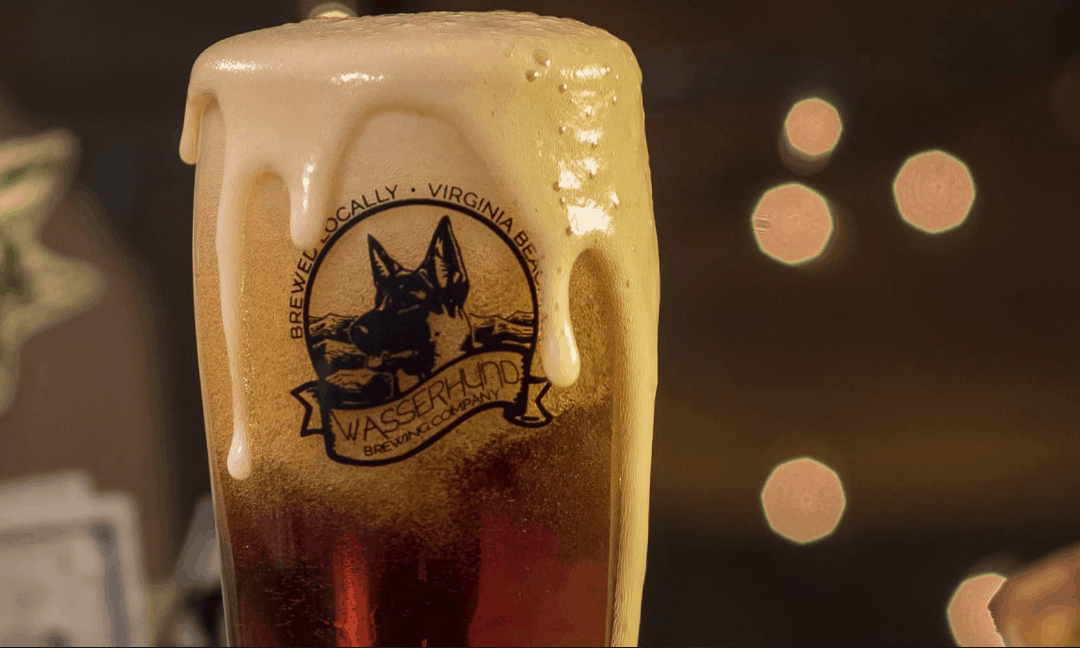 Wasserhund Brewing Company, named after “Water Dog” in German, was founded “from a love of the Beach, Dogs, and German beer.” Once you visit Wasserhund, you’ll find that the founders Christine and Aaron Holley have certainly created a space and line of delicious German beers to match this aspiration.

Aiming to fuse the laid back, beachy lifestyle of Coastal Virginia with the familial and comforting German culture, Wasserhund Brewing Company pulls out all the stops to give you a delicious food, unique beer, and a great experience. There are many things about Wasserhund that the 757 loves as a restaurant, and as a local business. Here are a few.

The Owners are Virginia Beach natives Christine (V. Tech, class of ‘10) and Aaron (Kellam High School, class of ‘06). Holley’s main mission is to fuse German beer culture with Virginia beach culture, one order of beer and pizza at a time. After five years of living in Northern Virginia while Aaron was active duty in the Navy, the couple took a trip to Germany. It was then that they realized they wanted to make their dreams of opening a German brewery in Virginia Beach a reality. Wasserhund Brewing Company was then born from a love of the beach, delicious German brews, and a love of good times with good people.

Originally home-brewers, the Holleys have spent years studying and perfecting the art of german-style brewing. They’re the do-it-yourself type of people, and they live for authenticity. When you enter Wasserhund, you’re totally in for an authentic experience.

When you take your first steps into Wasserhund Brewing Company, you’re immediately hit with a sense of fellowship. A trip there feels like a little more than just a good beer and a bite to eat– it feels like you’re among pals.

Above each table hangs a surfboard chandelier to illuminate your stay– the long tables create a communal space, almost like you’re sitting at a dinner table. Whether you hang out for hours or just a few minutes, you might make a few friends along the way. Sitting next to someone at the bar, or merging friend groups at the long tables is always prime real estate for striking up a conversation.

The place is always buzzing with conversation from the tables and the bar. Regulars are always present at Wasserhund, you might notice, and there’s a reason for that. Servers know their beer and are excited to get to know you, and the owners have a true presence in the restaurant.

You aren’t separated too much from the brews either, as the seating area is tightly adjacent to the brewery. Wasserhund gives you an inside look from the moment you sit down– a perfect view of the brewery itself leaves no room for mystery. You know exactly what you’re getting.

Beyond the comfy, social atmosphere and the libations to match, the Holleys set out to foster unity beyond the perimeter of Wasserhund. Each month, the brewery sponsors a cause chosen by customers and donates 5% of its revenue that month. As a customer, not only is your money going to a good cause, but you get a say in which one.

Some causes are local, while others are on a more national scale. In the month of January, Wasserhund donated to The Campfire Relief Fund spearheaded by Sierra Nevada Brewing Company, whose goal is to provide financial aid to the communities rebuilding after a destructive campfire in the Sierra Nevada.

Wasserhund also collaborates with many different small businesses and restaurants to create unique beers with a local touch. One of their most popular brews, the Haywire Husky, is the result of a collaboration with Lynnhaven Coffee Company. Using coffee beans provided by Lynnhaven, Wasserhund created a lighter beer with a build similar to a Pilsner. This innovative beer and many more on the list wouldn’t be possible without local collaboration. Bringing people together is the Wasserhund way.

This past year, Wasserhund teamed up with the Noblemen and Virginia beach’s newest music venue, Elevation 27, to host their third annual OktoberFest. With musical guest The Delorians providing the hype and with over 30 local breweries providing the German-style hops, OktoberFest 2018 was one for the books. Just as in the Wasserhund brewery itself, the festival had long bench-style seating, delicious food provided by world-class chefs, and an array of beers to choose from in the German spirit of OktoberFest.

In case the title doesn’t give it away, Wasserhund Brewing Company prides themselves on their German-style beer and brewing techniques. Even if you don’t find yourself drawn to German beer, Wasserhund puts a twist on everything coming out of their vats, so you’ll find something up your alley.

A few of Wasserhund’s most crowd-pleasing beers include:

-Wheat beer lovers, we’ve found your holy grail in the German Shepheweisen, which is a Bavarian-style wheat beer with aromas of clove and banana. Notes of sweet malt, spices, and just a dash of hoppiness compliment one another to create the top choice for lovers of this gluten-based concoction.

-The Purebred Pilsner is a light, clear German-style beer that really packs a punch. Drawing you in with its light spice aroma, every sip is a new experience. Sweetness from the malt invites you in, while slightly bitter hops add crispness for a well-rounded finish. Even if you’re strictly an American beer fanatic, this Pilsner might surprise you.

-Stouts are sometimes referred to as “the dessert of beers,” and here at Wasserhund, brewers take that saying to heart with their Haagen-Dog Ice Cream Stout. Described as “chocolate and vanilla ice cream in a glass,” this stout is the perfect sweet treat to follow dinner, we recommend pairing it with their Puggle Pizza.

-IPA lovers: Wasserhund did not forget about you! Wasserhund is perfectly on-trend with their IPAs, and puts a unique spin on them. The brewery carries a number of IPAs, their Doggy Paddle being one of the most popular. Doggy Paddle gives you the hoppiness that you look for in an IPA without too much bitterness. It sports a blend of three separate types of hops added continuously throughout the brewing process, which culminates into a delicious beer for the IPA novice and the IPA connoisseur alike.

Every good beer needs a delicious culinary companion, and Wasserhund’s menu does not disappoint. From german-inspired pizzas to deliciously doughy appetizers, there’s something uniquely German and comforting on the menu to accompany your drink. Here’s a few of the most popular items on the menu:

Puppy Tails
No, they aren’t tails from actual puppies. This appetizer is made of savory mozzarella melted into pepperoni, rolled into dough, and chopped up into smaller pieces to share. Served with marinara sauce to dip these savory rolls in, puppy tails are deliciously comforting to snack on while you sip on something like the Munich Dunkel Lager.

Specialty Pizzas
All pizza dough is made from scratch in-house using beer yeast, so depending on what’s brewing at the time, each pizza might taste a little different throughout the year. It all adds to the fun of the place. Here are a few of Wasserhund’s stand out pizzas:

The Wasserhund pizza, the brewery’s self-titled pie, is bound to be a highlight of the menu. Packed with tasty german toppings like bratwurst, sauerkraut, and house-made beer mustard, this pizza is the essence of the German fusion that Wasserhund loves to play with.

The Italian Greyhound pizza is another extremely popular item, topped with roma tomatoes, Italian sausage, and pepperoni. A simple combination of ingredients tends to go a long way as this is one of the most frequently ordered pizzas on the menu.

Vegan Options
If you prefer to steer clear from animal byproducts, then Wasserhund’s got your back. You can order the Vegan brat, which includes a gluten-free and vegan bratwurst, served on a gluten-free bun. The dish is served with sauerkraut and your choice of mustard (beer, stone, or yellow).

Kid’s Menu
Normally, a kid’s menu would include the typical chicken fingers and cheese pizza. And if you have a picky eater in your midst, Wasserhund makes sure to accommodate by providing a delicious cheese pizza. However, the kids menu also provides interesting dishes like peanut butter and jelly pizza and mac n cheese pizza– Wasserhund leaves no stone unturned when it comes to giving every customer a unique experience. You don’t have to feel like you’re dragging your kids to a brewery, because Wasserhund has them in mind with fun dishes to keep them satisfied.

More Than Just Food and Beer

Drinking a Wasserhund beer means more than just downing a great ale or lager, you become part of the Wasserhund family that Aaron and Christine Holley have created through their restaurant and through their mission.

Fusing German and beach culture might seem like a unique task, well, that’s because it is. But Wasserhund isn’t any ordinary brewery. Don’t believe us? Take a trip to their hilltop location and see for yourself.