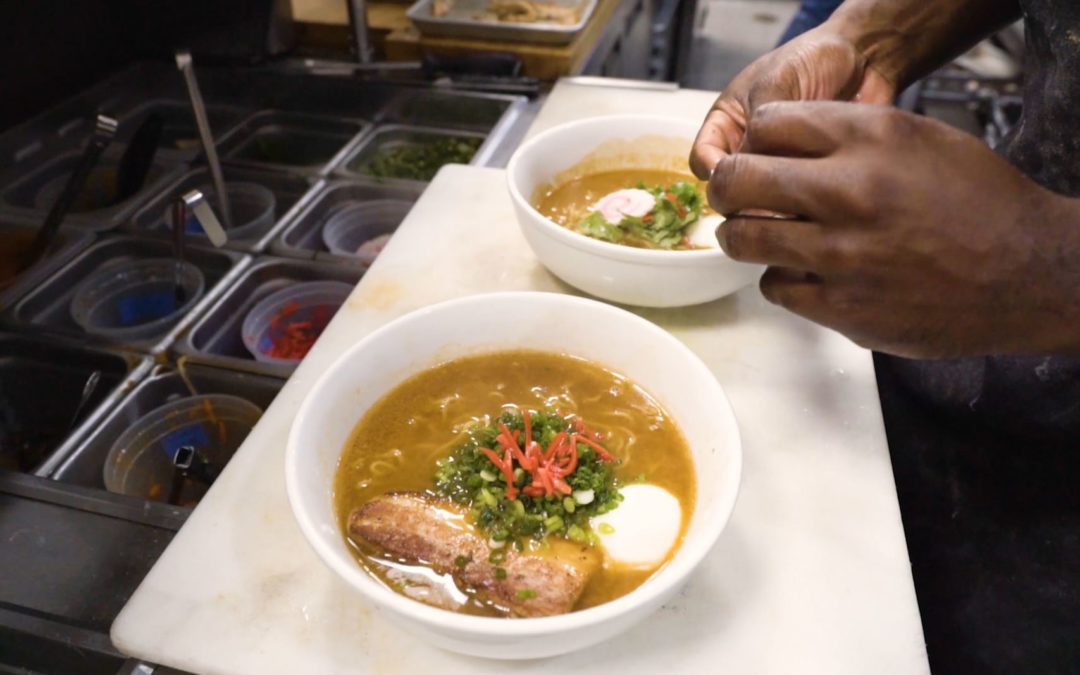 As a company based in Hampton Roads, we like to highlight some of the best restaurants, events and best things to do in Virginia beach and the surrounding area. In this week’s Bryant Digital restaurant highlight, we’re going to talk about a spot in Norfolk with a unique take on asian cuisine. Alkaline Ramen, a “modern asian restaurant” is located in Ghent in Norfolk, and isn’t like any other fusion place you’ve been to. Wildly popular, and acknowledged by VEER Magazine, The Virginian Pilot, and even a popular Food Network television show, Alkaline is one place you need to make a reservation, stat.

What’s known as Alkaline Ramen today was once a nameless plea for servers and chefs on Facebook to help with a ramen pop-up restaurant. Owner Kevin Ordonez also realized he needed a name, and quickly opened the floor up for suggestions on the same post.

There came the name Alkaline, named after the noodle that gives their ramen some of it’s signature characteristics, and the rest was history.

After selling out pop-ups in both Chesapeake and then Norfolk Alkaline moved from a temporary spot, to a permanent location in the hip Ghent area of Norfolk.

Alkaline is truly a restaurant for the people. Not only was the name crowdsourced, the current Norfolk location was made possible by a kickstarter campaign. Alkaline wouldn’t be possible without the community supporting it; and the fact that such a large amount of people supported the owner and mission when it was just a pop up, is really saying something.

Nowadays, it’s one of the top restaurants in the Hampton Roads food scene, and it’s no secret why. Alkaline has even reached a national platform by being featured on Guy Fieri’s “Diners, Drive-ins and Dives.” This is a huge deal, as this show highlights some of the best restaurants in the country.

Ordonez and his team have a special connection to the food that they create. They’re not just trying to be the hottest asian fusion restaurant on the block (even though they’re certainly on track).

“We’re not trying to be different for the sake of being different,” says Ordonez. “We’re trying to be ourselves and we think that that’s what makes us special in the long run.”

Alkaline can serve as a great place for asian-food aficionados or people who just stick traditionally with American diner cuisine. There’s a little bit of everything, and it’s because the staff knows both sides equally.

Founder and head chef Kevin Ordonez grew up straddling both sides of the food spectrum. “I grew up eating noodles and rice, but burgers and fries at the same time.” For him, it’s not just an asian fusion restaurant. It’s an expression of his culture and relationship to food.

Ordonez discovered cooking by taking a culinary class in high school, according to VEER magazine, and the craft unexpectedly stuck with him. He ended up completing a program at the Culinary Institute of America (he won a full ride), and quickly got to pursuing his passion of creating amazing ramen.

But it’s not just Kevin working on this ramen dream. It’s been a group effort not only from the people giving their support throughout the years, but the people working there.

His Chef-de-Cuisine Juanito Cate, Jr and Sous Chef Amanda Davis work tirelessly in the kitchen to create magnificent dishes on the menu, and soon-to-be on the menu. You can’t forget Alkaline’s culturist Melissa Pepino who ensures that the food is up to its highest quality. Help from bar manager and mastermind of beverages Jonathan Reynolds, along with the general manager Angeline Kintanar keep the place up and running.

It takes a small village to run a restaurant like Alkaline, and if you feel so inclined, the menu offers an option to buy a round of drinks for the kitchen for only ten dollars.

Alkaline noodles are the pasta commonly used to make ramen, Alkaline’s culinary specialty. When made from scratch, they are soaked in alkaline water or kansui, which is a potassium carbonate and sodium bicarbonate solution. This gives those delicious ramen noodles the characteristics that we adore: its yellowish color, and it’s spring like texture and appearance.

At Alkaline Ramen, there’s no shortage of mouth-watering, homemade ramen. Each dish takes on its respective, traditional Asian quality, but with a twist infused into each slurp.

“The food here at Alkaline is really inspired by the food and culture that I grew up with,” says Ordonez. “Each ramen is its own experience”

While the kitchen has mastered the art of traditional ramen, they choose to expand their horizons and experiment with these classic recipes to create something even better.

One of the most popular ramen dishes on the menu, Alkaline’s spicy red curry ramen packs a punch. Red curry ramen is made thai style, swimming in a creamy coconut-based broth. Including sous-vide cooked chicken and topped with cilantro, this dish is a go-to for flavorful spice-seekers.

Traditionally a non-vegetarian dish, Alkaline modified the recipe so that herbivores and omnivores alike could enjoy this classic ramen soup.

The broth used for this ramen begins using fresh vegetables from the kitchen. Vegetables are cooked down for hours at a time, then mixed with miso paste and vegetable stock to create the base for this ramen dish. The bowl is topped of with various veggies and scallions for a well-rounded and flavorful vegetarian dish.

If you like chicken wings, be prepared to find your new favorite. These fried chicken wings are cooked Korean style, and slathered in Alkaline’s house sticky sauce, and topped with fried garlic.

When Can You Visit Alkaline?

At the end of each month, Alkaline hosts special brunch hours where they offer a brunch menu.

Outside The Box and Worth The Trip

Everything about Alkaline makes it truly a one of a kind experience. Each dish in its authentic fusion not only celebrates the marriage of two culinary cultures, but the qualities that make every person unique. Alkaline isn’t the result of a trend– it’s the result of real people coming together to make food that represents them, and that’s what keeps people coming back.